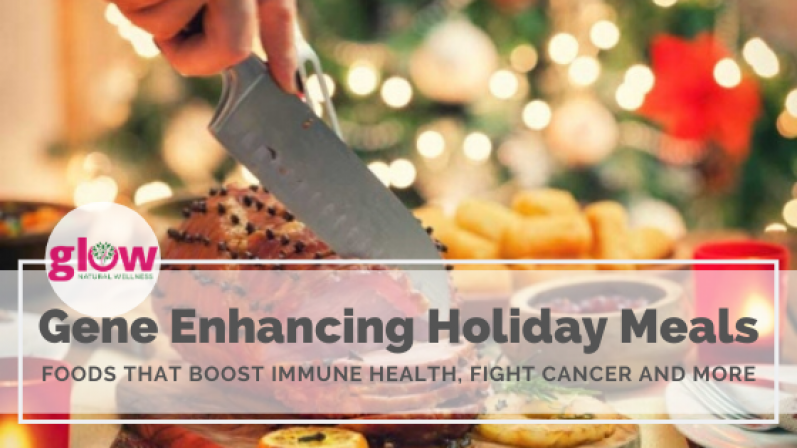 Holidays parties and gatherings are the perfect way to connect, catch up on old times, enjoy each other’s company and, of course, eat.  Food takes center-stage at many of our get-togethers.  Sharing a meal is a traditional way to strengthen the bond between family and friends; I just love sitting around the table with friends and loved ones.

When we think about all of this holiday feasting, most of us, especially those who are health conscious, immediately become aware of the effects these foods can have on our figures.  However, what many do not realize is that these same meals are also an opportunity to get nutria-epigenetic benefits from your food.

Nutriepigenomics is a big word, but what is means is the study of the effects different types of food and various nutrients have on the human body via epigenetic modifications. In other words, how food choices can change our gene expression.

Little do you know that avoiding those roasted vegetables for a second helping of marshmallow covered yams may do more than just increase your waistline- it might actually lower your protection against cancer!

Become your own genetic engineer!

The dietary choices you make this holiday season may have the potential to change the epigenetic marks on your genome associated with disease risk and well-being.  Epigenetic marks are like tags on your DNA that effect methylation and histone modification, which you can think of as the switches that turn your genes on and off, and the dials that turn their activity up and down.

Now that you get the idea, lets talk about the foods you are likely to encounter at your holiday gatherings and which ones you may want to put (or not to put) on your plate.

This holiday meal is often full of fattening treats like canned yams (with marshmallows on top, of course), green beans slathered in cream, topped with fried onions, and sugary cranberry sauce.  There are often some healthier side dish options, like that bowl of untouched brussels sprouts or freshly steamed broccoli, that while not as tempting to your taste buds, might epigenetically lower your risk of cancer, maybe even preventing tumor growth.

Research shows that there are natural chemo-preventative nutrients, such as the micronutrients folate and retinoic acid, as well as dietary compounds from cruciferous vegetables like broccoli or cauliflower that help to counteract the epigenetic effects that can lead to cancer. To fight against these epigenetic alterations, evidence shows that these chemopreventative agents influence expression or activity of DNA methyltransferases and histone modifying enzymes. (Gerhauser C. (2012))

In a clinical trial, dietary compounds such as diallyl disulfide, which is found in garlic, and sulforaphane, which is found in cruciferous vegetables, were linked to cancer prevention.  According to the research, these compounds act by inhibiting cell proliferation (preventing spread of cancer cells) and stimulating apoptosis (programmed death of cancer cells).  These actions are crucial to prevent the spread of cancer. (David & Ross (2007))

So dig into that bowl of broccoli or roasted brussels sprouts, and pass it to someone you love!

Entrees that protect your neurons

If your holiday buffet includes foods high in DHA (a brain protective Omega-3 fatty acid) like salmon, tuna, trout, mussels, oysters, cod, caviar, pickled herring, clams, or snow crab, it may be a good idea to make some room on your plate.

A study showed that adding DHA extracted from fish oil to neuroblastoma cells resulted in an increase in Bcl-2 levels, which reduced neuronal cell death, and an increase in acetylation of H3, which the researchers predict may correct altered acetylation homeostasis and potentially induce the expression of neuroprotective genes. Food containing this compound seems to affect gene expression and has potential neuroprotective benefits that could even help those suffering from a neurodegenerative disease. (Sadli N1, Ackland ML, De Mel D, et al. (2012))  Bottom line: DHA can protect your brain and save your brain cells.

If the holiday spread this year doesn’t already include fish such as salmon or other sources of omega-3 fatty acids, considering adding these items to the menu or bringing over a dish this year – it may help promote healthy neurons and protect against neurodegenerative diseases.

The after-dinner drink that strengthens your immune system

Skip that dessert liqueur or caffeine filled coffee and, consider sipping on some green tea after your holiday feast. There is evidence that a major polyphenol found in green tea, known as Epigallocatechin gallate (EGCG), may epigenetically affect immune system functioning.

EGCG in green tea has been shown to act as a DNMT inhibitor, according to a recent study. (Immunol Lett. (2011))  The researchers found that treating cells with this green tea polyphenol induced Foxp3 expression in regulatory T cells, which was associated with decreased DNMT expression and DNA demethylation. Regulatory T cells are crucial to proper immune function, including immune tolerance and autoimmune suppression. Other tea polyphenols such as catechin and epicatechin have also been shown to affect DNA methylation in a similar manner.

So, don’t head home early and pass up that cup of tea after dinner this year, stick around, enjoy the conversation and sip your tea, as it may actually epigenetically promote proper immune function and keep you healthy for the rest of the season!

P.S. Do you want to learn more about epigenetics?  CLICK HERE to watch my new masterclass, How to Leverage Your Genetics for Amazing Energy and Vibrant Health.